This week we have a guest blog by my good friend Jermaine. We met in 2012 in Bible School. He was in the class just ahead of me so I always looked up to him for wisdom and he has a lot of it. Jermaine may look a little intimidating at first, but don’t let that fool you…he’s really just a big teddy bear. Seriously, one of the nicest guys you could ever meet and he is completely on fire for God. His zeal for the Gospel has been a real eye opener for me and he has been a consistent source of encouragement over the years. He’s very talented as well as he played college football for Eastern Illinois and he raps too. You can check out one of his songs he did called “Gone Head” with fellow Charis Alum Rick Malone here. Gone head my dude…I see you.

Jesus Took Away The Sin of The World – Part 1 by Jermaine P. Eccles-James 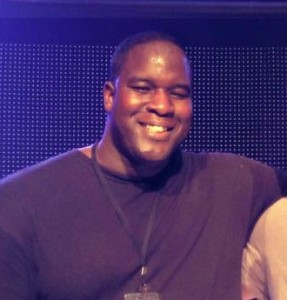 You are a spirit being. Every human being is a spirit being because we were created in the image and likeness of God who is spirit (John 4:24). We do HAVE a soul and a physical body but we ARE spirit in the same way that God our Father is spirit. We are of the God species, the God kind (Genesis 1:26-27; 5:1-2; Luke 3:38). When the first Adam sinned by eating from the Tree of the Knowledge of Good and Evil, the Tree that God had commanded him not to eat from, he became a slave to sin and enslaved ALL of mankind to sin as well on a spiritual level which would also affect the soul and the physical body of man. The reason why all of mankind was affected by Adam’s sin and not just Adam only is because all of mankind, beginning with his wife, had been inside of Adam when God told him not to eat from the tree. The entire human race would descend from the first man Adam.

“The Lord God commanded the man, saying, ‘From any tree of the garden you may eat freely; but from the tree of the knowledge of good and evil you shall not eat, for in the day that you eat from it you will surely die.’ Then the Lord God said, ‘It is not good for the man to be alone; I will make him a helper suitable for him’……….. So the Lord God caused a deep sleep to fall upon the man, and he slept; then He took one of his ribs and closed up the flesh at that place. The Lord God fashioned into a woman the rib which He had taken FROM THE MAN, and brought her to the man. The man said, ‘This is now bone of my bones, and flesh of my flesh; she shall be called woman, because she was taken OUT OF MAN.”-  (Genesis 2:16-18;21-23)

Adam was the very first human being and the ancestor of everyone. This made him the representative of the human race. When he became a slave to sin, we all became a slave to sin because we would all inherit his slavery to sin in our spirit. This slavery to sin is what God calls “death” (Genesis 2:17). Death in the spirit causes death in the soul and death in the physical body. Freedom from sin is what God calls “Life”. Life in the spirit causes Life in the soul and Life in the physical body. When Jesus said ” I have come that they may have life ” in John 10:10 He was actually saying ” I have come TO SET THEM FREE FROM SIN through my death and resurrection; the sin that they became slaves to when Adam ate from the Tree of the Knowledge of Good and Evil; the sin that is causing ALL of the physical, mental and emotional problems that we see in the world; the sin that causes EVERY human being to die spirit, soul and body! “. This is why when John the Baptist saw Jesus he made this statement “ Behold the Lamb of God who takes away THE SIN of THE WORLD “ (John 1:29). Notice that he did not say the sins of the world (plural) but the sin of the world (singular). The sin of the world is the sin that came into the world through Adam eating from the Tree of the Knowledge of Good and Evil. All individual sins committed by men and women are rooted in Adam’s sin of disobedience when he ate from the Tree. Jesus came to take away that sin which would, as a result, ‘save His people from their sins (plural)’ (Matthew 1:21). We are saved from both Adam’s sin and our individual sins the moment we believe in what Jesus Christ has done for us through His sacrifice.

“Therefore, just as sin entered the world through one man, and death through sin, and in this way death came to all people, because all sinned— To be sure, sin was in the world before the law was given, but sin is not charged against anyone’s account where there is no law. Nevertheless, death reigned from the time of Adam to the time of Moses, even over those who did not sin by breaking a command, as did Adam, who is a pattern of the One to come. But the gift is not like the trespass. For if the many died by the trespass of the one man, how much more did God’s grace and the gift that came by the grace of the One Man, Jesus Christ, overflow to the many! Nor can the gift of God be compared with the result of one man’s sin: The judgment followed one sin and brought condemnation, but the gift followed many trespasses and brought justification. For if, by the trespass of the one man, death reigned through that one man, how much more will those who receive God’s abundant provision of grace and of the gift of righteousness reign in life through the One Man, Jesus Christ! Consequently, just as one trespass resulted in condemnation for all people, so also one righteous act resulted in justification and life for all people. For just as through the disobedience of the one man the many were made sinners, so also through the obedience of the One Man the many will be made righteous.”- (Romans 5:12-19)

Now that we have established that Jesus Christ is the One who took away the sin of the world, the question becomes how was He able do it? To answer this question we must first understand who Jesus Christ actually is and what makes Him different from everyone else (including the first man Adam) because it is this unique difference that gives Jesus, and only Jesus, the ability to represent the entire human race in both death and resurrection.

“while we wait for the blessed hope—the appearing of the glory of our great GOD and Savior, JESUS CHRIST”- Titus 2:13

“In the beginning was the Word, and the Word was with God, and THE WORD WAS GOD……. THE WORD BECAME FLESH and made His dwelling among us.  We have seen His glory, the glory of the One and only Son, who came from the Father, full of grace and truth.  (John testified concerning Him.  He cried out, saying, “This is the One I spoke about when I said, ‘He who comes after me has surpassed me because He was before me.’”) Out of His fullness we have all received grace in place of grace already given. For the law was given through Moses; grace and truth came through JESUS CHRIST.”- John 1:1;14-17

“For since death came THROUGH A MAN, the resurrection from the dead also comes THROUGH A MAN. For as in Adam all die, so in Christ all will be made alive.” – 1 Corinthians 15:21-22

Death came through a man so it must also leave through a man, and not only a man but a man who can represent all men, a sinless man, a new Adam!  Jesus Christ is referred to as the Last Adam.

.” Thus it is written, The first man Adam became a living being (an individual personality); the last Adam (CHRIST) became a life-giving Spirit [RESTORING THE DEAD TO LIFE].”- 1 Corinthians 15:45

Jesus would represent all of mankind the same way that Adam represented all of mankind. Man would be saved through faith in Jesus Christ, as the NEW MAN who the human race would descend from, inheriting His sinless state the same way we inherited the first man Adam’s sinful state.

“…His purpose was to create in Himself one new humanity….”-  Ephesians 2:15

We will go much deeper into how Jesus did this in future posts because it is way too much for one blog lol! In the meantime, if you want to know now, God will tell you because HE TRULY LOVES YOU and although you may not see Him with your physical eyes, He is with you at all times. All you have to do is listen with an open mind and heart. Have an amazing day my good friend!