My Favorite Parts of “The Shack” & the Theology Behind It

HomeUncategorizedMy Favorite Parts of “The Shack” & the Theology Behind It 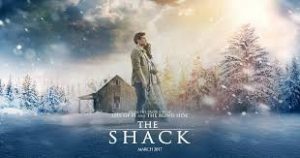 I saw the movie The Shack this weekend and thought to write a little bit about it. I loved the movie and the book, but am surprised at how many people were upset about the theology behind the movie.

I understand how people can be upset about God being portrayed as a black woman. I think it’s limiting God, but I can understand how they can think that. I also understand that based on what most people are taught about the Gospel, that they may not agree with the unconditional love and forgiveness in this movie. The thing that really gets me though is that it’s like Christians find it so hard to believe that God is actually good and has some fun. I mean they say He’s good all the time, but when God is actually portrayed as good they seem to have a real problem with it. I guess the way we are defining good must be different.

Those who have read my blogs know I’m pretty strict about what I allow into my heart. I was pretty skeptical when I first starting the book, but was pleasantly surprised. The God this book and movie portrayed lined up pretty good with the God that I know. I didn’t even know they were making a movie when I first started reading the book in October. I happened to finish the book the day before the movie came out. Perfect timing and not a coincidence in my opinion. So I wanted to discuss some of my favorite parts of the movie and link to blogs I’ve written in the past that are related to the topics and back up the theology in it.

My Favorite Parts of the Movie

There were a few scenes in the movie where Papa, Jesus and Holy Spirit were all together. I especially liked the one where they were all sitting at the dinner table. This is exactly what I had in mind when I wrote my series about Family Life. You really see the interaction between them and family atmosphere in that scene. Here is a link to a post in my Family Life series called “Breaking Bread Together” if you’d like to read more of my thoughts about the Family Life in the Godhead and the table you have a seat at.

Walking in the Cool of the Day

Spoiler Alert. If you haven’t seen the movie this might be a little bit of a spoiler. At the end you see a major difference in Mack’s countenance and attitude. In the beginning during The Great Sadness he was obviously distraught. You see the result God’s love had on him towards the end. He was a completely different person. This is what love does. He literally loves the hell out of us. You also see the effect of God’s love on Mack in the scenes where Jesus is walking on the water with him. The smiles on both of their faces say it all. They are just enjoying life while hanging out with each other. This is the way I believe God has always intended it to be. I wrote a blog post about walking in the cool of the day here.

He’s Especially Fond of You

Listen guys, God is the same yesterday, today and forever (Heb. 13:8). He clearly loved us from the beginning (see. Gen. 1:26, the word blessed in that scripture is barack in the original language and it means to speak well of and get down on one knee in adoration of). He clearly loved us after the fall (see Gen. 3 where He is still calling out to Adam and coming to fellowship with him and covers them in animal skins which is picture of the sacrifice of Jesus). Also, if you read Ezekiel 16 it’s a picture of the way God saw us even in our sin. He clearly loved all when He was on earth (see the woman at the well, woman caught in adultery, the thief on the cross, Him asking for forgiveness of those who crucified Him, etc.). He clearly valued us with the most value you could by sending His Son for us. He clearly loves us now through the ministry of the Holy Spirit (see John 14). So what’s the problem? Why is it so hard for us to believe that God is especially fond of us even in our sin?

This is not universalism. It is possible for someone to be beautiful to God, yet not be the possessor of life because they don’t believe in Him. A person still needs to believe in Him in order to have eternal life. You don’t have to tear down somebody’s identity in order for the Gospel to work. The Bible says the wages of sin is death (Rom. 6:23), not God’s wrath. If you need more convincing my blogs about God’s pursuit of you and why Jesus had to die will help as well.

Tough Question Answered In The Shack

Why Do Bad Things Happen To Good People?

They show what happens to Mack in the trailer but I won’t give it away in case somebody reading this hasn’t seen the movie. Let’s just say it’s a terrible tragedy. How Papa handles it is something that has been controversial. It’s one of the most common questions people have and something I really needed a lot of convincing on myself. The question being why does God allow evil or bad things to happen? Why doesn’t He stop it?

The way people make God out to be the bad guy leaves no need for the devil. It’s like we’ve made God the most valuable player on the devil’s team. The devil doesn’t play on God’s team either, he is not God’s messenger boy. John 10:10 makes it pretty clear and simple: The thief (devil) comes only to steal and kill and destroy; I (Jesus) have come that they may have life, and have it to the full. 1 John 3:8 says the reason the Son of God appeared was to destroy the devil’s work. Hosea 4:6 says my people perish because of a lack of knowledge. Putting these scriptures together we can see that a lack of knowledge about the devil and his intentions leads to death and destruction (bad things).

Now if you know it’s the enemy who is causing these bad things to happen, the next question you may have is why does God even allow there to be an enemy? Well, God didn’t create Satan to be our enemy. Satan was originally an angel. When God created man Satan had envy in his heart towards the position man was given. So God didn’t create an enemy for us, but he does give us free will, which is required in order for there to be real love and not robotic programmed love. In us having that free will, some will chose to reject God thus opening the door for these bad things. If you’d like to read more about this topic I wrote a blog post titled “why do bad things happen to good people?”

What Am I Supposed To Do?

When the main character Mack meets the Trinity, he goes out to the dock by the shack shortly after. Jesus follows him there and Mack replies by asking him what I am supposed to do? That’s the million dollar question right? We all want to know what it is we are supposed to do. Know what Jesus tells him? You aren’t supposed to do anything. I know that would blow a lot of people’s minds. They would freak out like what?!?! What do you mean you’re not supposed to do anything? You’re supposed to be doing this and that and all these other things. This speaks to the freedom that He wants us to have. He wants us to live our lives from passion not obligation. I wrote a blog entitled “What Are You Gonna Do Now?” that you can read here. It relates to this topic.

So hopefully that helps clear some things up for some folks. If you haven’t seen the movie or read the book I would highly recommend it, especially for somebody who has lost a loved one. It will be a blessing to you, bring healing to you and bring you closer in your walk with God. I’ve listed some miscellaneous notes I took from the movie below along with a song I liked from the movie and another one it reminded me of. I came across a few more links defending the theology behind the Shack here and here as well if you would like to read more on the topic. Thanks for stopping by. Blessings.

Misc. Notes From The Movie

The transparency of Mack -asking why God left. God says he never did.

Scene where they are at the dinner table – family life

Papa was always saying how he was especially fond of ppl.

Sin is its own punishment – wages of sin is death rom 6:23

Trying to make sense of our world through limited understanding

You don’t think I’m good. She didn’t know what he was talking abt when he said wrath.

Scene where Holy Spirit is getting at the root of problems. Slicing off lies. The mess was Macks own mind and thoughts. Little did he know he was also digging little Missy’s grave.

Holy Spirit asking abt his confidence to discern good and evil. Ever been wrong? We are determining good and evil based on our own wisdom.

We are all trying to be our own Gods.

Life w God is meant to be a conversation among friends.

Jesus telling him to focus on Him. Don’t look at the past. Focus on Him.

Religion is way too much work Jesus says. He doesn’t want slaves. He wants family to share life with.

Just wants ppl to know what it’s like to be truly loved.

Conversation w wisdom – here for judgment. Didn’t believe God is good. Didn’t think God loved his children well. He was not the one on trial. He was the judge. Spent his whole life judging.

Are these murders, abusers guilty? Boy was his father. Showing him there was something they were captive to. Legacy of brokenness goes back to Adam.

Ask if had choice to pick one kid to go to heaven. Said he couldn’t. Take me he said. He judged his children worthy of love. Now you know Papas heart.

Led him to a place where he says, I don’t want to be the judge anymore.

Tries to walk on water alone. Always works better when we do it together Jesus says. Shows us our default system is to go back to the DIY man, do it yourself.

Forgiveness is not letting ppl get away w stuff. It’s letting go of their throat.

At the end he says I’ve grown especially fond of you. This is the effect love has.

You don’t have to do it alone.

In one scene in the movie Jesus tells Mack He just wants people to know what it’s like to be truly loved. It reminded me of this song:

This is another song from the movie I really liked: