The One Thing You Need To Know About God – Ch. 2 Vlog

HomeUncategorizedThe One Thing You Need To Know About God – Ch. 2 Vlog 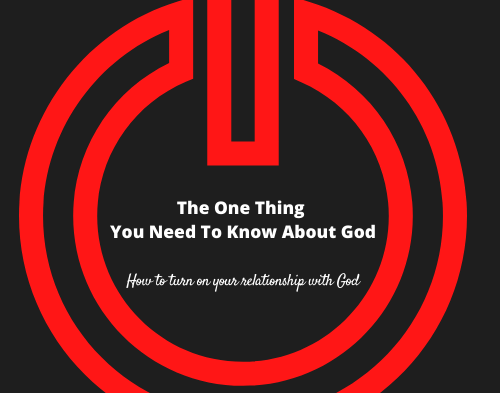 Chapter 2 of The One Thing You Need To Know About God Bible Study below. Enjoy.

In the first chapter we discussed how important it is to know that God wants you to come to Him and stay focused on Him. This chapter talks about the effects of hearing a mixed message and the main distraction most people have, money. For most people the voice of money is so loud in their life that they just can’t hear anything else. This chapter will help you get a revelation about money and help quiet it’s voice in your life.

Ch. 2 Outline – The Only Thing

Chapter 2 – The Only Thing

Wherever there is confusion, there is every evil thing. In the church there is much mixing of law and grace which causes confusion. It causes just enough reasonable doubt in a person’s mind that it keeps them from committing to God. They may be interested, but they’re often not committed.

I understand there may be a period of time where somebody is curious about Christianity and not quite ready to commit. I was like that for a long time. It’s okay. You want somebody to really know what they are getting themselves into before they commit. But I think many would not only commit sooner but also more wholeheartedly if they heard a consistent message.

Jesus said this in Luke 14 concerning being his disciple

“But don’t begin until you count the cost. For who would begin construction of a building without first calculating the cost to see if there is enough money to finish it? 29 Otherwise, you might complete only the foundation before running out of money, and then everyone would laugh at you. 30 They would say, ‘There’s the person who started that building and couldn’t afford to finish it!’.

And Paul said this in Ephesians 4 about hearing a mixed message:

“…we should no longer be children, tossed to and fro and carried about with every wind of doctrine, by the trickery of men, in the cunning craftiness of deceitful plotting, 15 but, speaking the truth in love, may grow up in all things into Him who is the head—Christ.”

Let’s use a guy named Johnny who is considering a new relationship with God and the church for an example. Let’s say Johnny lost his lost job due to the whole Corona Virus thing. He’s worried about not only paying his bills, but his marriage and his kids too. He is stressed out. He grew up going to church on Sundays but never really had a relationship with God. Let’s say because of all that’s going on now, he decides he’s going to cry out to God in desperation. So he starts researching different churches. He decides to give a few a try to see what they’re saying. The first one he tries preaches a message of the grace of God. He really feels good about the message and moving forward with his relationship with God. He feels a sense of peace, love and joy that he never has before. The next church he decides to try is on the other end of the spectrum and focuses heavily on what the members should be doing for God. They spend a long time on their giving message at the beginning of the service then proceed to stress all the things they should be doing like evangelism and volunteering to help build their church. Johnny leaves this service very confused. He’s turned off by this message when he was very excited about church just last week.

He continues to go back and forth in his journey with God as time progresses. He goes to church but never really gets involved. He’s part of what Christians call the “nod to God” crowd. He respects God and honors God in his life, but pretty much keeps him at an arm’s length because he’s just not sure who God is. Johnny can’t seem to get a consistent clear message about God, so he figures that’s just how God is, mysterious.

And church leaders wonder why the people don’t show up and get involved like they would want. Facepalm. There’s no telling what would’ve happened if Johnny could’ve just heard a clear consistent message about the grace of God. Johnny had a sincere desire to get to know God and have God in his life, but the enemy was able to come in and choke the word of God out like we saw in Mark 4. This didn’t happen because Johnny was a bad guy. It happened because he wasn’t hearing the right message. See how important the message you hear is?

Besides hearing a mixed message in the church, people get a mixed message in the world as well. They are told by almost every advertisement either directly or indirectly that the way to happiness in this world is through money. If they aren’t rooted in the Word of God at a young age, the temptation of money and the allure of the world is very strong. I know that very well myself. I wrote a lot about my experience growing up in my book 18 mile. Long story short, I grew up very heavily influenced by the hip-hop culture. Not only Eminem who was my guy from Detroit, but also Jay-Z. Anybody who knows about Jay-Z knows that he is very much into his money.

The Bible says hope deferred makes the heart sick. The Bible also teaches that God’s people perish because of a lack of knowledge. See many people’s hope is in their money and it causes much pain in their lives, some even becoming suicidal. Even they don’t commit suicide, life and death as the Bible refers to them is not just something that happens at the end of your life here on earth. Life and death is a present time experience based on what you believe. You are either experiencing life or death right now. It’s the people’s lack of knowledge that causes them to perish. Lack of knowledge as we learned in the parable of Mark 4, that God wants to be their provider. He is well able, but He doesn’t force Himself upon us. He relentlessly tries to persuade us, but again, He does not force us.

There is a story in the Bible about a guy like Jay-Z. Solomon was kind of like the Jay-Z of his day if you will. Solomon would still be the richest person in the world by far with the fortune he had. He would be richer than Bill Gates, Warren Buffet and Jay-Z combined. However, Solomon ended up lost and despaired when he started seeking other gods. He tried everything his wealth could buy him to find satisfaction and concluded that it’s all meaningless (Ecclesiastes 12:8). But there was an important event that happened before all of that which led to his wealth. We find it in 2 Chronicles 1: 7-12

7 That night God appeared to Solomon and said, “What do you want? Ask, and I will give it to you!”

8 Solomon replied to God, “You showed great and faithful love to David, my father, and now you have made me king in his place. 9 O Lord God, please continue to keep your promise to David my father, for you have made me king over a people as numerous as the dust of the earth! 10 Give me the wisdom and knowledge to lead them properly,[a] for who could possibly govern this great people of yours?”

11 God said to Solomon, “Because your greatest desire is to help your people, and you did not ask for wealth, riches, fame, or even the death of your enemies or a long life, but rather you asked for wisdom and knowledge to properly govern my people— 12 I will certainly give you the wisdom and knowledge you requested. But I will also give you wealth, riches, and fame such as no other king has had before you or will ever have in the future!”

God told Soloman to ask Him for whatever He wanted. How many of us would ask for the things? I know I would’ve. Because that is what we are seeking first many times. But God said because you’ve sought my kingdom, all those things will be added to you. Did he work for those things? No. Soloman had a mind to seek the one thing that mattered. See you don’t sacrifice the things when you put God first.

One more example from scripture I can use is that of Mathew 6. This is an awesome chapter about God being our provider. Here are some verses from it:

24 “No one can serve two masters. For you will hate one and love the other; you will be devoted to one and despise the other. You cannot serve God and be enslaved to money.

25 “That is why I tell you not to worry about everyday life—whether you have enough food and drink, or enough clothes to wear. Isn’t life more than food, and your body more than clothing? 26 Look at the birds. They don’t plant or harvest or store food in barns, for your heavenly Father feeds them. And aren’t you far more valuable to him than they are? 27 Can all your worries add a single moment to your life?

28 “And why worry about your clothing? Look at the lilies of the field and how they grow. They don’t work or make their clothing, 29 yet Solomon in all his glory was not dressed as beautifully as they are. 30 And if God cares so wonderfully for wildflowers that are here today and thrown into the fire tomorrow, he will certainly care for you. Why do you have so little faith?

31 “So don’t worry about these things, saying, ‘What will we eat? What will we drink? What will we wear?’ 32 These things dominate the thoughts of unbelievers, but your heavenly Father already knows all your needs. 33 Seek the Kingdom of God[e] above all else, and live righteously, and he will give you everything you need.

If God cares for the birds like this, don’t you think He will provide for you as well? See the voice of money will quiet down when you live from the platform of contentment and trust that God is your provider. Lust for money leads to serving money, therefore you are not content and will never be content.

And seeking God first doesn’t mean you have to stop doing all the other things you like either. You can still enjoy your family, friends and hobbies. You don’t have to suffer and give it all up. Don’t let the devil convince you that a life with God is not fun and full of labors. The Good News doesn’t make you tired, it energizes you and takes care of your every need. It’s the only thing you need.