Tough Questions Series Part 2 – Why Did Jesus Have To Die?

HomeUncategorizedTough Questions Series Part 2 – Why Did Jesus Have To Die? 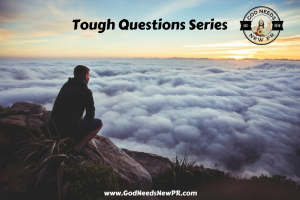 This week is part 2 of the “Tough Questions” series. In this blog I’ll address the question of why Jesus had to die. This is more of a technical question for all the nerds like myself out there, so it will be a longer blog. It’s also a very complex subject, so I’ll need the help of some experts on the topic to help me out…you know the usual suspects (Greg Henry & Bertie Brits mainly).

I’m only concerned with helping people understand the truth…not trying to make myself look like some intelligent theologian. Just fyi, I do consult several resources when doing my research and God is still working with me to help me get my own revelation of these things deeper. One of the ways He is doing that is through the writing of these blogs. In the meantime, I’m just doing the best I can to help spread this Gospel truth that has changed my life. The gift of a teacher is being able to take something complex and make it simple to understand. That’s my goal here and this information can really help bring peace and revelation about the true nature of God.

-The Gospel is not about what God did to change his mind about man. We think when we believe we change how He believes about us. He has a persuasion about us and He comes to us to persuade us. He is the same yesterday, today and tomorrow. ~ Greg Henry

-God never believed the lie about us. It was man who walked in the lie. ~ Greg Henry

-Those who study church history know that around the year 300 paganism mixed with the church and this is where we got this concept that God requires a blood sacrifice. Our God is not a pagan God. ~ Greg Henry

-There is justice that happened at the cross but it was not retributive justice it was restorative justice. ~ Greg Henry

The Gospel is not abt how God became good or what He did to change his mind. He is the same. See Heb. 13:8. Click To Tweet

Hopefully those bullet points and quotes make it clear the Gospel is not about how God couldn’t stand to be around us and Jesus was sent to deal with God’s anger problem. It’s about God reconciling us back to Himself and setting us free from sin and death…not His anger. Without the Gospel it’s impossible for God to win our hearts.

So, Jesus needed to die for two main reasons:

-To set us free from the bondage of sin and death

I know this may be very different from what a lot of you have heard, so this will require much explaining which I’m happy to elaborate on.

Why man needs to be saved

Another verse that talks about this same thing is Romans 5:12 – Therefore, just as sin entered the world through one man, and death through sin, and in this way death came to all people, because all sinned NIV. Again we see it’s sin that brought death and reigned over man after it entered through Adam.

Here’s a good analogy paraphrased from Greg Henry about what sin does; “In basketball, the guard will pass to another guy when he’s in a position to score, that is called an assist. Sin didn’t need an assist from God to bring death. God didn’t assist sin in killing people. The ball was passed in to sin and sin dribbled that ball all the way down the court and dunked. It got the ball and did what it does. We can remove God from that equation and see that it is the wages of believing on the wisdom on Satan that brings death, not God being mixed in that brings death.”

The Purpose of Satan

So when sin entered the world, man needed to be saved from it and it’s effects (death). As Romans 5:12 stated, sin entered through Adam by way of the belief system Satan planted in the Garden. The lie that they were not the god kind, that God was hiding something from them and that they could use their own ability to get God’s quality of life.

Once Satan got it in his heart to come after us, we needed to be saved. Even if Adam & Eve got it completely right, they still needed to be saved. It’s like if you live in a city that has crime. Even if you are a perfect law abiding citizen, you still need to be saved from the thieves and murderers, etc. Why did Satan have a persuasion to come after humans? Because we were exalted to a position above him. He was filled with envy and that is what caused him to be a murderer. His heart was full of pride and this is how iniquity was found in his heart. He wanted what God gave to man.

Once Satan got it in his heart to come after us, even if we got it all right, we still needed to be saved. Click To Tweet

Why Jesus Had To Die

The only way God could seat man at His right hand is if He died away the death established in the flesh and then sat that man at His right hand. Then this new picture could be a lamp unto our darkness. It would give us something new to believe on while at the same time blowing up and destroying the lie we believed about ourselves and how to obtain eternal life. Jesus would have never lifted death off of us if He never died on the cross.

I want to touch on Isaiah 53 & 54. These chapters are typically used to talk about the punishment Jesus had to endure but are actually beautiful pictures that give us further insight into what happened on the cross.

Here again we see the importance of how we define certain words. Understanding the word chastisement in this context is huge. In the Hebrew it speaks of correction. In Jesus dying on the cross, it chastised or corrected our belief. Man had a wrong way of believing and it needed to be corrected. That is chastisement.

Numbers 21 – Picture of the Cross

When we can find types and shadows in the Old Testament it always gives us deeper revelation. In Numbers 21 we find a picture of the cross which helps us further understand the message God was sending in Jesus’ death, burial and resurrection.

Here is a quote from Greg Henry that I think sums it up quite well: “At the cross, God is saying to us I see what is killing you, now let me incarnate myself into human flesh so I can kill the thing that is killing you. The thing that was killing us is a belief system that we can earn our own glory and honor. Not let me kill you, let me kill that. We were in bondage to death, now death can no longer reign over you.”

The Ministry Of Reconciliation

The thing that needed to be reconciled was man coming back to God not God coming back to man. There is a big difference between seeing the Gospel with a foundation that God was disappointed with us and seeing the foundation as the love and compassion of God for people even in their sin. When we see this is how God is, it causes us to trust Him.

On the cross, God absorbed the death that sin brings for us which sets us free from our bondage to sin simultaneously judged against sin as a way unto life. This helps us see sin for what it really is and that it was killing us.

I also hope you see that you don’t have to tear down somebody’s identity in order to preach the Gospel to them. When you do that you start their life with God having a negative view of themselves and then we wonder why they struggle to have a good life with God.

But in our time something new has been added. What Moses and the prophets witnessed to all those years has happened. The God-setting-things-right that we read about has become Jesus-setting-things-right for us. And not only for us, but for everyone who believes in him. For there is no difference between us and them in this. Since we’ve compiled this long and sorry record as sinners (both us and them) and proved that we are utterly incapable of living the glorious lives God wills for us, God did it for us. Out of sheer generosity he put us in right standing with himself. A pure gift. He got us out of the mess we’re in and restored us to where he always wanted us to be. And he did it by means of Jesus Christ.

My little children, these things write I unto you, that ye sin not. And if any man sin, we have an advocate with the Father, Jesus Christ the righteous:

2 And he is the propitiation for our sins: and not for ours only, but also for the sins of the whole world.

For the message of the cross is foolishness to those who are perishing, but to us who are being saved it is the power of God.

Song Of The Week

We tend to think God was so displeased with us but actually you’re the best thing that ever happened to Him. He had a dream about how he wanted his life to be, that He would be able to share His quality of life with somebody. He looked all over for someone to share His life with and finally found it in you. You took His breath away. So much so that He got down on one knee and proposed to you (See Gen 1:28). You’re not a dirtbag in God’s eyes…you’re actually the best thing that has ever happened to Him.